The Mother of God has passed in Kazan 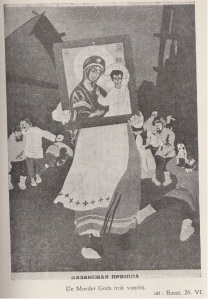 “The Mother of God has passed” in Kazan

In early Soviet days, religious holidays were deemed responsible for moral depravity, debauchery, fighting and familal feuds. Here we see the Icon of the Mother of God being carried through the streets of Kazan (Каза́нь, capital of Tatarstan), whilst in the wake thereof we can observe fighting peasants, drunkards, mistreated women and general troublemakers. There are bottles of vodka being held up, loose teeth can be seen on the floor…
Commonly a comparision would be made in those days between the religious holiday, and the amount (expressed in buckets) of vodka or amount of roubles wasted.

In a similar fashion the following picture can be interpreted.

Here is implied that instituting a Kolkhoz (колхо́з) or collective farm is in its essential nature an atheist factor. “Because the lesser the farmer (who is most often a former peasant) feels dependent upon the unreliable forces of nature, the quicker he will turn away from religion.”

This way the main philosophy of the godless modernizers (which is how they called themselves) of the Soviet-Russian 1920s and ’30s. 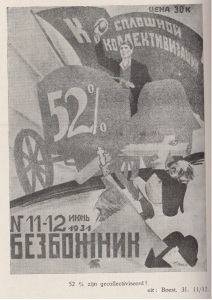 52% (of Russian farmground) is already collective! 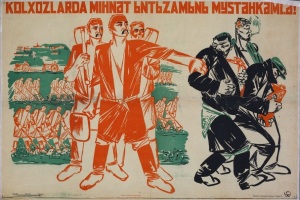 A call to strengthen work discipline in the Uzbek kolkhoz

I'm a 35 years old biochemist from Belgium with a particular interest in Russian culture, history and politics, and general slavic culture and history. This blog is intended to put the Russian Godless Movement and its main media outlet, the journal безбожник, bezbozhnik (godless) and several others in its wake which existed during the interbellum period, in an objective historical perspective. Currently I must use mostly secondary sources as the journals are difficult to locate. The blog is a work-in-progress which I mostly put together during the little free time I have. I'll try to make it not too chaotic and keep it more or less structured. Also, English is not my first language, so forgive me any grammar and spelling mistakes in advance.
View all posts by Olivier Corveleyn →
This entry was posted in Uncategorized and tagged antireligious, atheism, besboshnik u stanka, CCCP, collectivization, communism, debauchery, drunkard, колхо́з, farmers, Kazan, Kolkhozy, muzhik, orthodox, religion, soviet, Tatarstan, USSR, vodka. Bookmark the permalink.